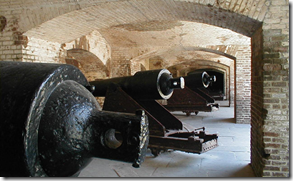 A group of federal, state and local agencies are teaming up in hopes of making the Fort Sumter National Monument energy efficient and free from the electric utility grid.

Ultimately, the team aims to power the fort through on-site solar energy generation that would be supported by a hydrogen-fuel cell backup power system. Before that can happen, a feasibility study and cost estimate for the project will have to be conducted.

“This solar to hydrogen project at Fort Sumter demonstrates an innovative solution that will generate clean power while relieving the grid,” SCRA CEO Bill Mahoney said in a news release.

The monument, located on a small island near the entrance of the Charleston Harbor, currently receives power from an electric line. Its backup energy supply is provided by a diesel-electric generator on-site.

The Fort Sumter project has its roots in a federal program called Energy SmartPARKS, which was established by the National Park Service, DOE and Department of the Interior in late 2008. The initiative is aimed at implementing and highlighting sustainable energy practices in national parks as a way to promote green energy across the U.S.

The program also works to develop and expand partnerships with the private sector, nonprofit organizations and educational institutions. The Fort Sumter agreement is being funded jointly by the DOE and the National Park Service.

“This project allows the state of South Carolina to showcase the many opportunities to address national energy requirements,” said Fred Humes, the Center for Hydrogen Research director. “South Carolina’s work force has the talent, the know-how and the creativity to help advance the nation’s solutions to pressing energy needs.”

Project officials hope the equipment is up and running in time for the year-long sesquicentennial events planned around the April 1861 attack on Fort Sumter when the first shots of the Civil War were fired.

If you’re thinking about bringing your business to South Carolina’s Aiken, Edgefield, and Saluda region, we’re ready to accommodate you with a broad variety of existing facilities and ready-to-build sites.

When you’re competing in the global marketplace, connectivity and fast access are critical. The Aiken, Edgefield, McCormick, and Saluda region’s location in western South Carolina will put your business at the heart of a very fluid transportation grid, no matter which modes are important for you.